The intriguing story behind one of Portsoy’s most iconic buildings, The Salmon Bothy

As you stroll along the shore from Portsoy’s harbours towards Portsoy Links Caravan Park and The Sail Loft, you won’t fail to notice a striking yellow three storied building standing slightly back from the road and nestling into the hillside on your right.

Appearing unrelated to other structures in the area, you may be curious as to its purpose. Well don’t hesitate to take a closer look, in front of you is a time capsule which tells much of Portsoy’s story. Locally this is referred to as the Ice House, or the Salmon Bothy.

Built in 1834, this unique structure began life as an industrial base for the once lucrative commercial salmon fishing industry. Part boil house, part giant refrigerator, part storage and work centre, in times past this was a hive of industry and the story of its development is quite fascinating.

From the early middle ages, salmon fishing was in the hands of the Crown. It was extremely profitable and gifts of fishing rights were made to favoured individuals and religious orders. European merchants made frequent visits to Scotland to purchase salmon, part boiled and packed in barrels. Sometimes the monarch demanded that payment was made in silks and wine, as well as silver.

Visitors to Scotland, including Daniel Dafoe, often commented on the prodigious numbers of salmon to be caught in many rivers. They were so common in fact, that some farm servants demanded that they weren’t fed salmon more than twice a week!

Originally all salmon fishing took place in rivers and estuaries, (like the Deveron and Spey), which Portsoy doesn’t possess. However, during the late 18th and early 19th centuries, fixed engines (bag nets and stake nets) were developed, which suited the rocky shores around Portsoy.

Apparently, riverbank owners found much more money could be made from rod and line anglers than from the rents of salmon fishers, so the fishers were pushed out and developed the new netting system at the coast.

It appears that by trial and error, the new systems developed. In the late eighteenth century, William Dunbar an innovative factor at Portsoy for the Earl of Seafield, landowner of this area, arranged for the blasting of rocks at the mouth of the Boyne Burn and the erection of a small salmon bothy to accommodate working fishers. He then let out the fishing rights to a series of tacksmen or fish merchants, who employed the men to work the nets. 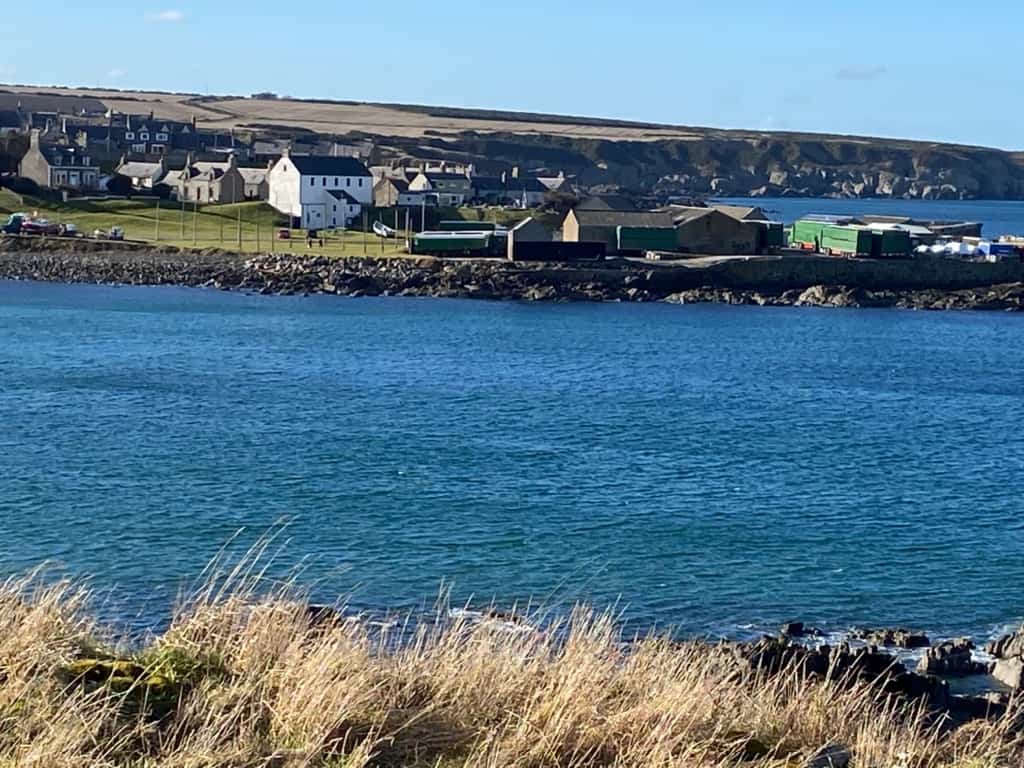 Salmon fishing at Portsoy developed apace, with the fish shipped to Edinburgh by ‘swift schooner’.

Evidently a base of operations was required and so the Ice House, Bothy, Store and Office were constructed. Who had it built? Some feel it must have been landowner, the Earl of Seafield, however, just a few years before, he had spent a large sum of money repairing Portsoy’s harbour which had been seriously damaged in a huge storm.

In 1834 he was busy updating Cullen harbour, so my own feeling is that it wasn’t him. The Portsoy Document, created around this time says that Messrs Hogarth were possessed of a fine boil house in the Seatown, so I suspect as wealthy fish-merchants they were responsible for construction.

What does the boil house to refer to? Well, if you get the opportunity to explore downstairs in the Museum, squeeze into the left-hand corner and you will find a mysterious chimney not far from the well. We think there probably was a cooking range here, where salmon were part cooked before being packed in barrels with vinegar to cure them.

Ice of course was the main means of preservation. As an oily fish, salmon doesn’t keep very well, however, tightly packed in ice collected from local ponds, the fish will be kept comparatively fresh for transportation. Ice of course, needs cool conditions if it is to last. For this reason, the Ice House faces north, has very thick walls and is dug into the hillside. Apparently ice collected over the winter might be kept until August and was widely used by the salmon fishing industry.

Perhaps winters were colder in those days and ice was easy to collect. In later times, ice was brought to Portsoy from the factory in Macduff. By then, the railway had reached Portsoy and salmon was sent south by train.

There are quite a number of Ice Houses along the Moray Firth formerly used by the salmon fishing industry. Most of these are very basic and functional, nowhere near as fancy as our building at Portsoy! Perhaps it was meant as a status symbol by its owners, what do you think?

And if a Bothy is a place where farm workers live, why is our place called the Salmon Bothy? Well that’s a story for another time. Watch this space!